CAS 360 is everything we’ve dreamed of!

”Since transitioning to CAS 360, we’ve been able to optimise our staff structure and performance. Now, our team can jump on CAS 360 and immediately resolve issues or proactively ensure things are sent out on time. It’s everything that we’ve dreamed of.

Founded in 1998 by Mark Withers and Stephen Tsang, Withers Tsang is a vibrant and innovative Chartered Accountancy Firm based in Auckland, New Zealand.

While they’re renowned for their knowledge around property investment and development, their expertise extends to tax structuring, compliance, business and asset planning, succession planning, IRD liaison and more. Their clientele includes property developers/investors, SMEs, and individuals, across many different industries. 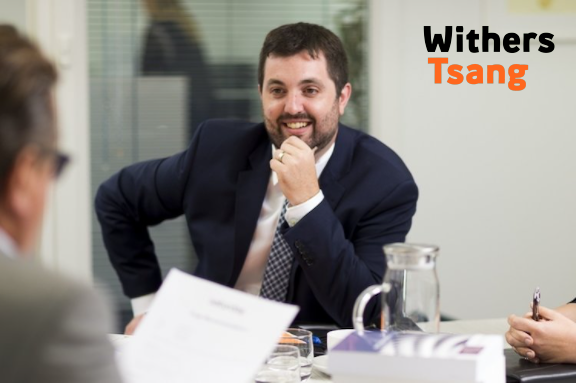 Lack of flexibility and reduced efficiency

After using CAS Desktop for over 15 years to administer Company Compliance, Withers Tsang saw an opportunity to migrate to a more automated system (CAS 360) and improve the way things were done within the Firm and increase overall efficiency.

“We had always been happy with CAS Desktop, as it is relatively inexpensive and we’ve had the same person, Dayna, using that system for around 15 years.”

“When using CAS Desktop though, Dayna had to print off the various company documents, manually scan them and send them off to clients for signing. The client would then often have to print, sign and scan them back. The whole process was drawn out and there was also no easy system that could tell us when documents had been returned, when they were overdue, or if we needed to chase them up.”

All the manual data entry and tracking were slowing down the Firm’s processes, although back at the time, they were ok with that. It was only when they decided to migrate the software solutions used by the Firm to the cloud that they saw the benefits of transitioning from CAS Desktop to CAS 360.

“In 2019 we decided to start looking at the cloud, but with no real urgency. Then, once we had moved to other cloud-based practice systems, like Xero Practice Manager, our need for an integration between cloud platforms became more real.”

“We saw benefits in moving to the cloud because of the potential integration with other cloud solutions such as electronic signing, document providers, etc. Plus, the flexibility of being able to jump onto the cloud whenever and wherever you are is a plus.”

What we were faced with and why we made the move all of a sudden, was that we had our first COVID-19 lockdown in March 2020. And we quickly realised that we were heading for a really busy time for Annual Returns. Nearly 90% of our systems were already cloud-based. So, we bit the bullet and moved to the cloud for our company compliance.

“We looked at two main competitors in the market, CAS 360 being one of them.”

“Admittedly being accountants, the fact that CAS 360 was significantly cheaper on a year by year basis versus the competition, really helped. But also, the fact that we had an existing relationship with BGL meant that we felt the transition would be easier. And it was.”

“The BGL team gave us the confidence that, even though we were transitioning during lockdown and during a busy time, that the need for it and the issues that we might face for training and all the rest, were not ones that we couldn’t overcome.

In the end, the BGL team got us set-up within the first week of lockdown and the transition was actually easier than what we thought.”

“Ultimately the goal is to sync the contacts databases between CAS 360 and Xero Practice Manager. So, if we update an address or phone number in Xero, it will automatically flow through to CAS 360 and reduce the duplicate process of having to update in CAS 360 separately.”

For Withers Tsang, the two biggest benefits of CAS 360, besides integration and being cloud-based, are the electronic signing and document workflow features, allowing the team to send and manage compliance documents seamlessly within the platform. Plus, it connects directly to the Companies Office.

“During the first lockdown, Dayna was working from home without a printer or scanner for about four weeks. So, being able to send documents by email (via CAS 360) straight to the client and have them come back, electronically signed, was a huge relief. If we hadn’t made the move, and Dayna wasn’t able to do that, she would have been screwed, to put it bluntly.  There was just no way that Dayna would have been able to get those Annual Returns out and back in time.”

“Plus, CAS 360’s direct connection to the Companies Office means that it can tell us which returns are going to be due, which returns are overdue and which documents have been sent but not returned. It’s just got a really clear and easy to follow dashboard.”

“Now, our team can jump on CAS 360 and immediately resolve issues or proactively ensure things are sent out on time. On the other hand, clients can electronically receive, sign and return documents by clicking a few buttons – meaning we get things back quicker and waste less time.”

“It’s everything that we’ve dreamed of.”

“Since transitioning to CAS 360, we’ve been able to optimise our staff structure and performance.”

“For example, when Dayna was using CAS Desktop, she was only able to do our Annual Returns, company incorporations and the like. Now with CAS 360, Dayna is saving time by not having to do the manual processes of scanning, uploading, checking that things have been signed etc. So, she’s been able to take up another role, overseeing some of our AML Compliance, which was previously spread out across other parts of the firm.”

“We just had another COVID-19 lockdown and the team went home without a care in the world, work-wise. When we were coming out of lockdown, we actually said to the team: just stay home for the rest of the week. There’s no point worrying about it. Come back on Monday.”

“COVID-19 was enough pressure for everyone. We’re all concerned about our health, our families and all the rest. So being able to take away the pressure of the workload has probably been the biggest benefit for the team.”

“The only thing our staff are concerned with now, is if they can steal a spare monitor from work so they can have two at home. As soon as they get home and turn on their computer, everything’s pretty much exactly the same as if they are at work.”

Want to know more? Book a call with our team!

Contact Us
Careers
About Us
Our Awards
Our Blog